A man sent me a first OkCupid message that alternated between asking me out and asking me for writing advice (my profile says I freelance, he’s trying to).

Well, your message was 407 words, so I’d start with revisions. People are busy; make it snappy. (This entire post is 100+ words shorter than his message.)

Second, I don’t know SHIT about writing. I vomit out whatever’s in my brain, then shorten it – that’s my “process.” Sometimes I consult a thesaurus. I can’t advise you when I don’t consider MY writing a skill. I haven’t honed any craft — I write what happens. Anyone can do that. So…do that. Start a blog. Ask to contribute to sites you like. Apply for writing jobs.

His profile says he’s starting over, mentions being “codependent and childish” in the past, and now, at age 43, really trying to man up. His message said he probably shouldn’t even be dating yet, but his discomfort tells him he should.

Dude… Respect, for sure, but I am also codependent and childish, starting over, trying to man up, and dating when I probably shouldn’t be.

I can’t date myself when I hate myself.

I’m not posting his whole message because it was honest and took courage, so I can’t mock him. But seeing those issues laid bare straight away is, for my own issues, overwhelming. I know he’s not asking me to help fix his life, but that’s what it feels like. No can do, man — I’m working on my own. Only one of us can be the fixer-upper.

The shit we BITCH about… She’s not SMILING?!

I can’t imagine why. The Underground Railroad seemed like a real hoot.

It IS a shame she’s not smiling, since all those white dudes on my money are happy as fuck. They’re ALL whimsy and shenanigans, sticking out their tongues, one’s got a friend doing bunny ears behind his head. And OMG, it’s totes hilar-balls how Franklin’s got one of those moustaches on a stick on the $100 — motherfucker was so jolly, Santa Claus asked him for pointers. In fact, Franklin advised Santa to get the reindeer. *nod* I think I read that somewhere.

Via The Guardian: ‘Cheer up, love’ – why is Harriet Tubman being told to smile 100 years after her death?

If you’ve never had a day where you look in the mirror and think, “GodDAMN, I look good,” I highly recommend it.

Spring and summer clothes and weather really are my wheelhouse. I’ll also be buying more of this new makeup (aptly made by Tarte) and thanking the gods of hair for blessing my rolled-outta-bed coif today.

Sometimes a plan just comes together, and today it did, in the form of my unplanned FINE ass.

P.S. I went to therapy tonight, and one of the first things she said to me, unprompted, was, “You look wonderful!” So there you go, y’all — my cuteness is verified by a licensed professional. (My brain went full Cady-Heron-in-the-black-dress: “I KNOW, right?!”)

Well, yeah, don’t be silly — we only care where Dennis Hastert’s dick is if it’s in the wrong restroom, not in a minor. 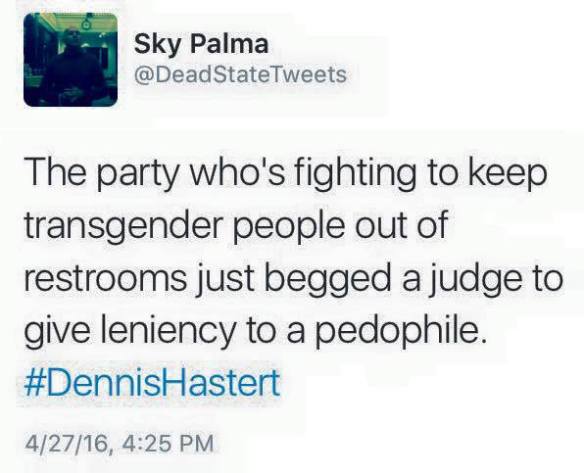 I’ll go start re-working the lyrics in your musical to include your jaunty, whimsical attitude toward sexual assault.

Oklahoma court rules that forced oral sex is not rape if victim is unconscious from drinking:

P.S. If you wondered, the toy IS made in America. Because America’s ALREADY fucking great. (Literally, apparently.)

I emailed the OkCupid guy and canceled our first date, which had been tentatively scheduled for Saturday.

I’d already gotten antsy about how often he’d been contacting me — I really don’t need to talk to you EVERY day when we haven’t met yet. I feel like a dick because he’d told me repeatedly how much he was enjoying talking to me. But my brain did its “Jesus Christ, PLEASE stop talking” thing that happens when I feel overwhelmed and smothered. Whether that’s valid or just inferred, it’s really hard for me to come back from.

I know I get weird, but this one was honestly, legitimately, not on me. I maintain that if one of the other red flags is something I’m not comfortable sharing here, THAT is a big, fuckoff red flag. I told y’all about that time I blew a guy in a Zipcar — it’s not as if I have a ton of boundaries.

My newly updated Amazon wish list is proof that Jesus loves me and wants me to be happy.

Or, you know, proof that book publishers know an It Girl when they see one. Whichever.

(I’m trying to score review copies, but they won’t send them until right around the release dates. *shaking fist at life*)

Me: “I think I’ve set a new record for getting interested in, then totally over, an OkCupid guy. This last one took, like, three days.”

Friend: “Are you serious?”

Me: “I’m probably exaggerating, I guess it couldn’t have been THREE days… *looking at email* Holy shit, it WAS — we started OKC messaging Friday, emailing Saturday, phone call Sunday night, and I woke up yesterday thinking, ‘Yeah, I think I’m done.'”

This is why my therapist loves me.