OK, yeah, dude should be on a watchlist, but on the bright side, I’m totally referring to my insides as “my satanic ram’s head” at least once a month from now on.

“Y’all, I can’t go out tonight — my satanic ram’s head is back on its bullshit.”

I MAY have been OkCupid ghosted because I told the guy I didn’t watch the Eagles playoff game last weekend.

Which, you know…that’s fine. Enjoy waiting for the Eagles to wet your dick.

Paxil, Adderall, pajamas, an irresponsible quantity of coffee, and a breakfast brownie.

Am I doing it right? 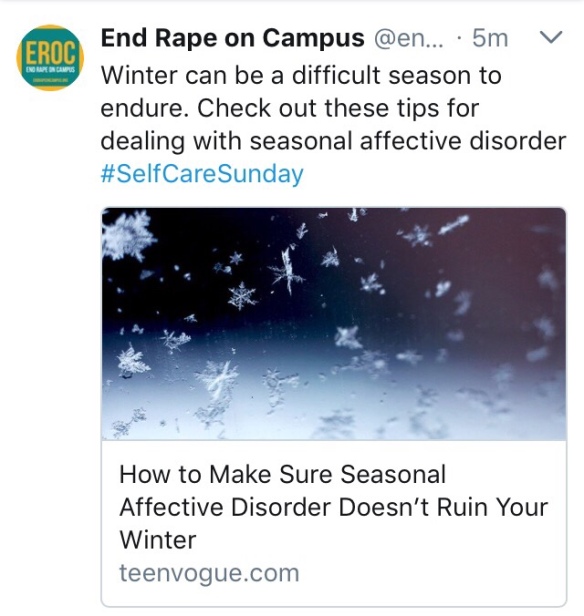 Hell, can I get that tattooed on my lower abdomen?

The whole Aziz Ansari thing has brought up a lot of weird shit for me, because I know I’ve let things happen I didn’t want to, for a lot of different reasons, and the men couldn’t possibly have known I wasn’t into it, because I pretended to be. And I would never blame them for that.

That said, this woman is saying she made it clear, verbally and non, that she wanted to slow things down. And so I do blame him.

THAT said, I DID wonder why she didn’t leave, even having BEEN in similar situations where I ALSO didn’t leave, and I wasn’t even with a famously “woke” comedian who’s literally written a book on “Modern Romance.”

This sums it up.

Tonight in therapy: “It’s bad enough my favorite comedians are being outed as molest-y weirdos, but it’s also really fucking up my Spotify lists.”

Ahem, so… I have most packages delivered to my office, and my coworker just handed me this one.

It’s a candle. But that’s…REALLY not what it felt like…

Part of why I’m OK being single (for the most part*), and part of why I’m in therapy, is the relationships I see in my family. I realize I can only go by what I see, but what I see is people who would rather be kind of…dulled and resentful in a relationship than be alone. Especially my mother and sister, I really don’t hear them LIKING their spouses. I’m often their sounding board for all their relationship “squabbles” that to me sound like much larger issues, and that was BEFORE I started therapy.

(* Not even gonna front — I’d really enjoy some sex, and I have a big, heavy mirror I can’t lift, so I could use some assistance there. But otherwise, I’m aight.)

Anyway. All this to say that I’m grateful for the men I know, and for the relationships I’ve had. Because I’ve never dated anyone shitty for more than a couple months, and I was quickly able to see, “Oh, you’re shitty. We’re done here.” I’ve never had to prattle on for an hour straight about all the things my boyfriend doesn’t do to my liking, or found myself unable to address issues WITH a boyfriend and have him at least try to understand. And I think that’s partly because I KNOW there ARE decent dudes out there. I’ve dated them, I’ve worked with them, my friends have married them. And I’m (mostly*) fine being alone until one arrives in my life.

It’s been kind of a shit year for men, and rightly so, but hey, here’s to the good ones, eh?🍸