I hadn’t planned to post again, but I went back to Match after the last post, aaand… I don’t goddamn remember the clever blog pseudonym I gave this dude while we were dating, but we dated, and it didn’t end well, and since that end (which was…2014? 15?*), he has:

1. Left a Christmas gift on my doorstep while I wasn’t home. It was maybe June and I’d told him repeatedly since Christmas that I didn’t feel right accepting the gift, because HI. BREAKUP.

2. Texted and Facebook messaged just to say hey. (I ignored him every time.)

3. Made me realize I have, like, six boundaries and, in the month we dated, he’d disrespected them all.

Oh, and I later realized he’s kind of a racist. Not, like, a Klan racist — he wasn’t motivated enough to attend meetings — but one of those hometownie racists that only tells the racist jokes to white people because he thinks the white people are with him.

So. Obviously when I went back to Match, GUESS WHO HAD LIKED MY PROFILE.

What, from the bottom of my heart, THE FUCK?

I’m gonna go throw my phone in a river.

* EDIT: I just went back in WordPress and found out it was actually 2013. Jesus Christ. 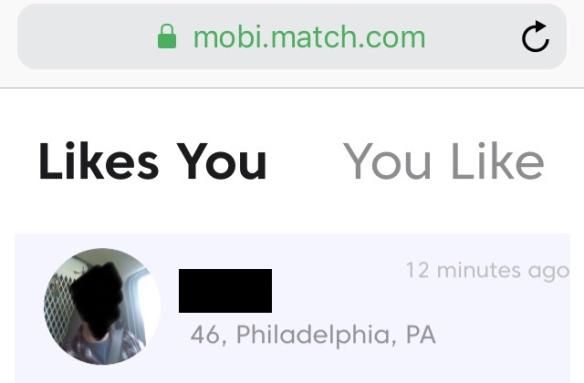 3 thoughts on “Mercury in retrofuck”