Top 5 Cars I’m Never Getting Into… 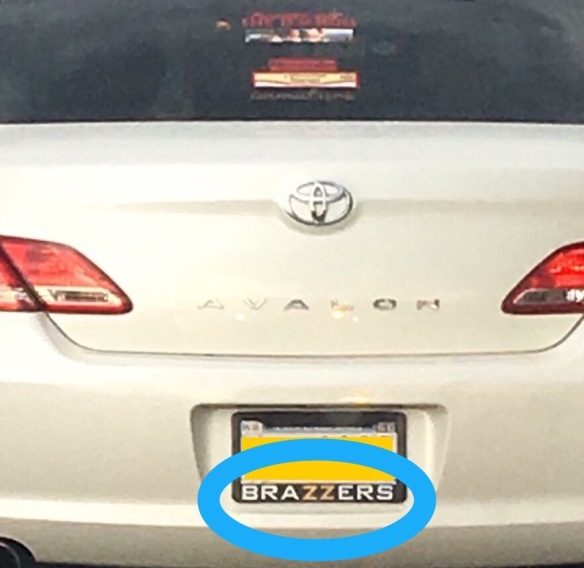 I’ve had a shitty week — just too much stupid all coinciding: relationships, finances, PMS, change in prescription drugs (I don’t think they’re supposed to make you feel worse), and ball-sacky weather. It’s mangling my body, my sleep, and my attitude.

I wish our bodies had more obvious gauges for things. A red light should come on to let you know you need to eat a vegetable because your body requires, like, riboflavin or whatever. Or, *ding ding* “Oh, OK, I have to exercise more and maybe I’ll stop feeling as if I’m constantly dragging my body through sand,” or, *BEEP* “Says here this drug is fucking me up. The gauge just told me to call the doctor and get THIS drug, and it’ll fix you right up.”

Or even a green light: “You’re OK, it’s just the heat. Crank the AC and drink more water.”

We should be able to upgrade our bodies like car models. I’d like the Sport features, please.

Can my body get nav?

Text from a friend: “Just saw a guy in a truck with the window decal that said ‘4 doors for more whores.’ I’m sure a classy guy like that couldn’t possibly be single.”

Me: “I will add that to the list of vehicular decor that disqualifies a man from getting his dick anywhere near me. See also: truck nuts; Confederate flags; bumper sticker reading ‘louder than your girl’ next to a giant, clearly compensatory tailpipe. (All things I’ve seen this year.)”

— He says he doesn’t like “prissy, materialistic, high-maintenance women,” but one of his profile pics is of just his car…an Audi. (I’m more of a Hyundai fetishist, myself.)
— He’s making a peace sign in more than one of his profile photos. I’m not against peace, but for fuck’s sake, you’re a grown-ass man, not a 10-year-old girl.
— Similarly, he has one or more photos in which he’s flipping off the camera. If you’re giving me the finger in your profile photo, you’re never giving me that finger in my body. (And, not to toot my own vagina, but that is your loss. Like, a lot.)

I think it’s clear I don’t shy away from vulgarity. I’m far from mature or highbrow about humor, as evidenced by all those Anthony Weiner jokes I snickered at. And I’m comfortable admitting that I’m 1/4 white trash/redneck, minimum.

However. I do have standards, goddammit. And beneath my standards is a particular subset of men who think they’re car-clever.

Example: Any car with plastic balls dangling from the back? You’re not fucking me. You won’t even get a date. Because you’re obviously 12 and I’m not ending up on “To Catch a Predator.”

But driving to work this morning, I saw my new favorite: a Plymouth Neon with two decals on the back bumper that read, “Louder than your girl,” with arrows pointing to two super-manly and not-at-all-phallic-compensating exhaust pipes.

I couldn’t finagle a photo while driving, but this is a similar image I found on Google: 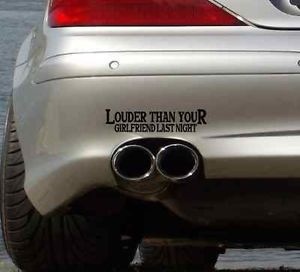 I have questions, sir. Your car needs footnotes.

Also, I mean, if it IS about sex… If you have a choice between making your car scream or a woman scream? You should pick woman. Every time. Because that woman will be so flooded with post-coital hormones that she’ll buy you all that car bullshit to ensure you continue bringing your A-game to her ladybits. And THAT is what we in the biz call “a win-win.” The last guy who made me scream, I would have bought exhaust pipes for the entire perimeter of his car if that’s what he wanted, as long as he kept his tongue where it was until I was finished and didn’t want to chat too much after.

P.S. Your car isn’t louder than I am during BAD sex, so you got screwed in entirely the wrong way here.