From Jessica Valenti: Why is it easier to invent anti-rape nail polish than find a way to stop rapists?

I get what she’s saying, really. I agree, we should find a way to stop rapists. Absolutely. Let’s do exactly that.

However, WHILE we’re working on that incredibly complex problem, whatever makes one guy re-think drugging a woman’s drink, or prevents ONE woman from ingesting the drugs, or gets us recognizing sexual assault as an issue and educating each other, I’m on board. Will this stop all rape? No. Don’t be ridiculous, it’s nail polish. But if it prevents ONE? Or even if it just sparks another conversation or bit of awareness (which it has)? Worth it.

I absolutely see why people are pissed about it, though, how it makes it the woman’s responsibility, and in the WORST fucking way, too. One of the headlines I read: “Look Great and Stay Safe with ‘Date Rape’-Detecting Nail Polish.” (Not a joke. “Date rape” really was in quote marks like it’s not a thing.)

And the first line of another ABC article was “Pretty nails may be the newest way to foil date rape.” I understand that that’s a problem, truly. That is, in scientific terms, some bullshit.

But the polish itself? Good on you, NC State students. You kids today with your science. The USA Today article I read said “55% of about 1,570 colleges and universities with more than 1,000 students received at least one report of forcible sex offense on campus in 2012. From 2010 to 2012 there were 14 forcible sex offenses reported on NC State’s campus.” If that number drops even a little as a result of this, then I’m calling it a success. Should we be doing more? Certainly. So let’s DO more, but don’t dismiss a few industrious college kids for trying. 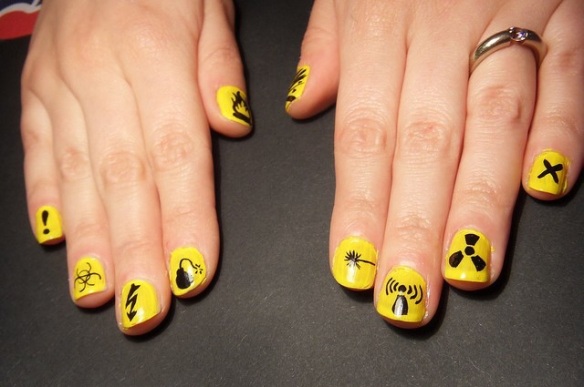