Apparently it takes me 5 years and 3 apartments to finally ovary up and get rid of my Ex Box.

I’d gotten rid of other things incrementally, but this was the greeting cards, and I am a sucker for a greeting card.

Logically I know there’ll come a time when seeing my ex at a group gathering of “our” still-coupled friends won’t make my brain all swimmy afterward.

Now that I’m home from tonight’s festivities, though, since I’m half Irish and half redneck, let’s hear it for stifling my feelings with whiskey and off-key singing along to blaring country music.

Bwah ha ha… “Throw some soft cheeses into the mix, unless you’re insecure about your weight because she sure mentioned that, too. You know what, you are going to need that cheese. And all the wine.”

Via Reductress: 6 Wines that Pair Well With Having Just Gotten Off the Phone with Your Mother 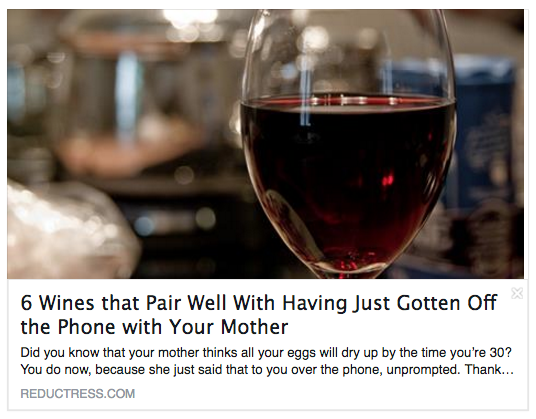 I never mentioned that Elbows Guy had the same name as my ex.

But let’s say my ex’s name is John — Elbows Guy was a grown-ass man who chose to go by “Johnny.” That was enough of a departure to clear him for a first date, but in hindsight I don’t know what I was thinking. Moaning “Johnny” in bed was not gonna work for me, just generally. But also, my ex’s family called him Johnny when he was a kid, and occasionally as an adult at family gatherings. So in any sexual context, Johnny has “ick” all over it. (Johnny Castle notwithstanding.)

So of course today I get a nice enough first message from a different OkCupid guy, and I’m thinking, “Huh. This is pretty good, I’ll probably respond,” but then toward the end he says, “By the way, my name’s ‘That Guy.'”*

Of course it fucking is.

I gotta stop screwing around with guys with common names. Next guy I get naked with has to be named, like…Moonbeam.

*If you’ve just followed recently, That Guy is the pseudonym I assigned to a guy who hurt me pretty badly, and when I used to talk to friends about him, they’d be like, “Oh, THAT guy…”

Heading to dinner with friends in the town I used to live in. The town in which I’d kissed/gone out with/done things with my ex, and then with That Guy, in various locations.

This post started one way, but took a wrong exit to a place in my head I visit sometimes. It usually passes within a day, and then I’m back to at least a marginally normal self-image.

I went on vacation in part to get some perspective, maybe achieve sudden clarity via Southwest Airlines party mix.

But I did realize I can’t meet this guy I’d been talking to on OkCupid. We’d talked about meeting once I got back, but I realized I’m not feeling a connection, at least not yet. I have pretty good instincts for that, though, so possibly not ever. (This has also happened with two other OKC people.)

I feel bad, but even though That Guy felt nothing for me except my clitoris, that whole debacle helped me remember how I feel when *I* feel a spark with someone, even if it’s not mutual. My ex, too — I felt that in my gut and in my butt, and I’m not feeling it for these OKC people. Whatever the issues, my interactions with That Guy and my ex set a standard for what I need to feel and how I need to be treated.

I know I have to move on eventually. I just don’t think I’ll be able to, or should, until I feel something more compelling — I don’t need to be in love, I just need to feel a chemistry.

I wondered if I should meet that OKC guy just to interact with a man in a potentially romantic capacity, the way I used to go on job interviews for practice. But I don’t want to make anyone my practice. Having BEEN used fairly recently, I can’t do it to someone else. (Though I hear it’s effective.)

I may still be too damaged for this. I can’t tell if I’m really not ready, or just scared.

I already wasn’t feeling the best about myself when my ex and I broke up. I asked him why he was even with me, what I’d contributed to our relationship, and why he’d want to have children with me. He explained the kid thing, but wouldn’t tell me why he’d been with me. He said I should know. I still don’t. I believed he loved me. I believe he still does. I just don’t know why. (The best I can come up with is that I let him have his own space and his own time, and never made him watch “The Notebook.”)

Following that, That Guy made me feel smart, sexy, and funny…buuut then told me he never really thought any of that. Well, I guess the “sexy” part was true — as indicators go, his constant erection in my presence was probably a good one.

When I thought he cared about me, I spent time with him thinking, “Pfft…I’m amazing.” He said my confidence showed, that I owned my business in the bedroom, that I was funny and a good writer — he was one of the reasons I kept writing this blog. And then he was like, “Ha ha, just kidding, you’re none of those things.”

Plus there have also been professional aspects where I wasn’t good enough to do one job or another, and a general feeling with my family that I’m just not worth being heard.

So… I don’t know what I’m doing now. I know it’s called SELF-esteem, but mine’s been knocked around a lot the past few years. I don’t know if I’ve ever considered how deep-seated all this is, and I see the therapist partly because I don’t know how to fix it myself. I have friends who, if they’re reading it, would punch me in the neck for thinking any of this. I don’t ALWAYS feel this way, but when I do, people can tell me whatever good things they want, I just can’t see it for myself.

Ahem… Why, what do YOU think about on vacation?

Oh, OK. So I can be messaging back and forth with a perfectly nice guy from OkCupid, and inadvertently say something that reminds me of my ex, then of That Guy, then back to my ex, and now I’m crying?

Sure, yeah — I am absolutely ready to be dating, even casually. It will not end badly at all.

I understand this is how I move on, and I’m sure a time will come when it doesn’t feel like cheating, but…not so far.

I could blame PMS, but I think I might just be ready to embrace my obvious destiny to die sexless and alone.

We’ll just add this to the therapy list. That woman is earning her money.

This is probably a story that would’ve been more useful before Christmas, but maybe we can all carry the concept into the new year…

One of the best things my ex ever did for me was help me realize I shouldn’t let it bother me when assholes behave like assholes.

Years ago, my aunt said something REALLY hurtful to me on Facebook. I was at work, and had to leave my office and call my ex to cry about it in the parking lot. (I rarely cry. It’s one of many unhealthy points of pride. But she’d hit a nerve.)

And my ex said, “I don’t understand why you’re upset.”

“Because she’s horrible. Who would say that?”

“Well…an asshole would say that. You think she’s a dick, right?”

“Do you value her opinion? Do you want your life to be like hers?”

“So why are you upset about what an awful person thinks? She’s an asshole. Why are you letting an asshole make you cry?”

I was fine for years after that, but recently had a wonky emotional time in which I was letting her get to me again. It helps so much to keep that conversation in mind — how obvious it seemed, what a glorious turning point it was for me to finally see it, and also to know other people see it, too. It helped a LOT this past Christmas.

You go ahead and make your snide little comments, dearie. I don’t know what made you such a miserable jag, what made you so unhappy with your life, but you’re damn sure in no position to judge mine.

This happened the last time I tried online dating, too: After the initial ego boost, once I actually read what people are saying and how stupid most of it is, my brain has this tiny seizure, like, “What the fuck am I even doing? I belong with my Ex. This is absurd, he is my Person, and I’m never finding anyone better. I am going to die alone, or worse, under some 24-year-old townie-fuck douchebag with a naked-except-a-hand-over-his-junk mirror selfie** as his profile pic.

So. There you go, Therapist. Take my money, let’s work this one out.

Kidding. I don’t really need her for this one. I just have to keep reminding myself I don’t have to answer anyone I don’t want to, or do anything I don’t want to. They can’t come GET me, they live in the computer.

Onward. (Or if you prefer, “Excelsior.”)

** Yep, that’s a thing. I’d been on the site for 24 hours and saw three of these tykes, along with several merely-shirtless mirror selfies. Don’t get it twisted, I’m not mad at it — those guys SHOULD be shirtless at all times. But they’re looking for “DTF” girl. (I mean, I AM, but…not like that. I’m a lady, motherfucker. I’ll see you naked when I am jolly good and ready…which, in the grand scheme, really doesn’t take that long. If you can’t wait ’til the second or third date, you’re more than welcome to go fuck yourself. But although I’m not always the most confident in my sexual prowess, I can pretty much guarantee I’m more fun than fucking yourself.)

Normally with people I like/love/respect, I’m very, “I’m not gonna diss you on the Internet, ’cause my mama taught me better than that.” It’s part of why I don’t talk much about my ex, because he’s still one of my best friends and I don’t need to air those issues publicly. My close friends and my therapist have heard it, and that’s enough. (Plus, if I ever said anything here that got back to him and hurt him, I’d jump out a window. [I know. Hence the therapist.])

But OTHER than him, we’re all OK with me being kind of an asshole on my own site on occasion, right? We know I’m a little insane but generally a nice human, except when I get pushed too far? Because tempers are gettin’ a little Jersey up in here at Smug HQ — people are stepping to my backyard swagger. So, um…fair warning, sometimes I’m an asshole, but generally only in writing. (And in my defense, it really does take a lot. I mean…they had it comin’…)

(I love that I’m clarifying as if any of you gives a dick if I’m not Gandhi.)