I texted a guy’s dating profile photo to a friend…

Me: “Holy shit, I didn’t even notice the curtains! They got lost behind the camo, the cake, and the Crazy Eyes!”

Her: “I’d like to give him props for making that cake, but that’s a Shoprite liner. He didn’t make that shit.”

I’m not posting the whole photo here because I’m not a COMPLETE asshole, but here are the offending curtains, and a bit of the camo.

NB: I am complete shit at home decor, so I’m not judging anyone’s style — I don’t even HAVE curtains. But I do have very mild OCD, and that mismatch would drive me batshit insane. 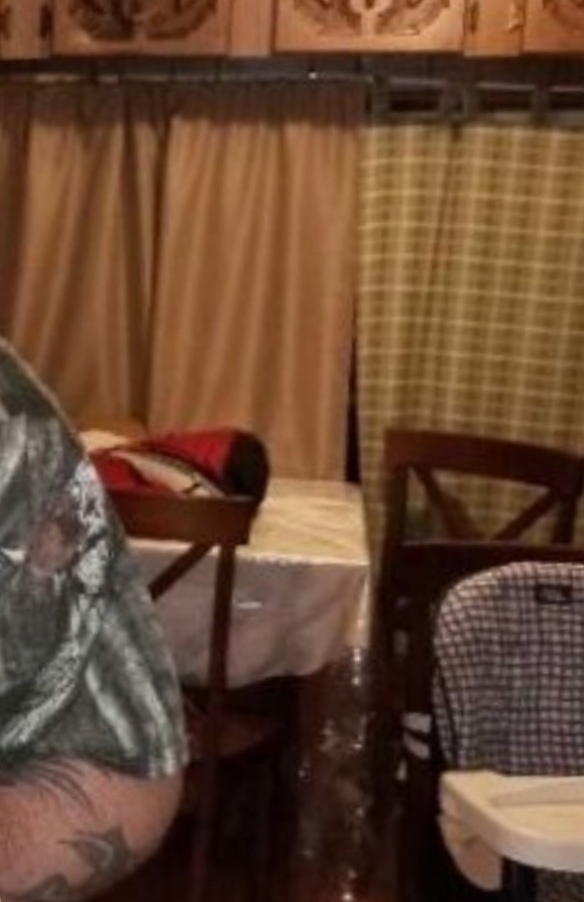 Um, no, YOU’RE suddenly the kind of woman who stares at her phone waiting for a text.

As I mentioned, Elbows Guy emailed me back after I’d told him his comment bugged me.

Here’s what I’d said, between other things we’d been discussing, one of which was a second date:
“You tell me if you end up free Tuesday, and I’ll tell you if my ashen elbows and I can join you. Sound good? (Can you tell I took that far too seriously and now wonder if you’re a. Mean, or b. Will think/say things about the rest of my body if ever you see it?) :)”

His response, also among other topics:
“You definitely are reading too much into the elbows thing. It was just a simple observation since your skin is really soft and your elbows were a little rougher (I suspect from resting them on your desk while in hardcore writing mode). It’s the little details like that which I find fascinating in people, especially women, since they usually have a story to tell.

“Your (a) vs (b) question is actually the same question – ‘is this guy a judgey asshat who’s going to make fun of me and my quirks in order to make up for his own insecurities and fragile ego?’ And the answer to that is no. I have a very thick skin and will occasionally say something without thinking how someone not similarly thick-skinned will take it, but I’m not a judgey asshat. I have a sneaking suspicion that was not the case with one or more of the guys you have recently dated.”

1. I pay a nice lady to be my therapist. I don’t need you and your degree from the Lifetime Movie School of Emotional Trauma.

2. I HAVE projected from previous men I’ve known, but I’m usually self-aware enough to recognize it. (Like when you called me “Miss” the other day and my brain spasmed because that’s what That Guy called all the faceless, interchangeable women in his harem — THAT was projecting. I knew it, and I shut it down.)

3. I don’t lean on my desk while I’m writing. My elbows are just shitty. (And way to double down on telling me so.)

4. “I’m not a judgey asshat, but I’m gonna point out your faulty sentence construction.” (I know he’s right. Shut up.)

Sometimes my brain goes all River-Tam-batshit-banana-pants-at-the-end-of-Serenity — swinging weapons around in a circle to fight off whoever comes near her. Whenever I’ve stuck that feeling out because, “I might be overreacting,” I really can’t remember a time my brain was wrong.

I debated posting this because I wouldn’t want people posting verbatim bits of MY OkCupid profile online, so I try to take that into account. I don’t know if I’m successful in walking the line between harmless mocking and being a giant, judgy bitch, but I try.

THIS is not judging. THIS is documenting an impressively bold and insulting leap in logic in a guy’s self-summary:

So, wait, just because I don’t want to spend my life with you and your shitty kid, I must only be looking for some serious deep dicking?

You know what, though? I wish him the best of luck finding a nice, proper lady who wants to be a stepmom in a long-term relationship with a man who casually implies women are whores.

I’ve been a little on edge lately about coming off like a complete tramp. As if sensing my self-doubt, EVERY time I’ve put on my Pandora ’90s hip-hop station, it starts with this:

Pandora is a judgy panda.