I actually don’t think a man ever has reacted my voice. I’m sure they’ve reacted to things I’ve said, but that’s because I’m a wanton harlot, not because of my voice.

Again, though, thanks for the heads up about your mini-fetish. As someone who is also aurally fixated, I respect it. But you’re creepy about it, and you used emojis, and…no.

This feels like I’m being catfished by some pervy Ursula.

Things I knew FOR SURE yesterday:
“I am taking a break from this blog and from OkCupid to focus on work and getting my life/health/goals in order. I will write about this break tomorrow night and that’ll be that.”

Things I know for sure today:
“I have a new blog follower (hi!), and received a free book I requested from a publisher so I can review it here. Also, I just saw a man on OkCupid who’s cute, tall, literate, and likes to play naughty in bed but was somehow both forthright and gentlemanly about it.”

Right, then. “Strike that. Reverse it.”

I would like this to happen to me in the very near future.

I can’t figure out how to embed it because everything (read: ABC) is dumb, but here: This is a scene from last night’s episode of Scandal, and I am coveting the experience HARD.

I’m just gonna send the guy this video like it’s office training material. Except the office is my body, and “You bettah WORK.” (Ahem. I apologize for that.)

If Scott Foley ever grabbed my hair and put his mouth on that part of my neck, we wouldn’t have even made it into the apartment — I would have just pulled up the dress and ridden him like we were in the Hallway Tour de France. And I’m not ashamed to admit that watching him do…THAT to Olivia, even just for a tragically fleeting moment, produced an actual tingle. Kerry Washington gives great sex face.

Don’t judge me, we all have our deal. Mine just happens to involve being occasionally slapped on the ass with a fashionable leather glove by a trained assassin. Whatevs.

I was aiming for a quiet, post-work communion with my soulmate, Nachos. But then I saw this, and it was an emergency “Stop, drop, and write” situation. (Not joking: I’m still dressed in work clothes, flopped in dismay on the living room floor, writing this on my phone.)

OkCupid tells me I’m an 86% match for a guy whose profile says ONLY that he wants a woman who’ll watch him jerk off (“JO,” to be exact) on Skype. He assures the reader he’s good at holding out, and will finish only when she tells him to.

Also, there are no photos in his profile of his face or of his penis — just his fully clothed midsection with a hand resting on his pants-covered junk. How can I possibly know if I’d want to see you do this? I’m sure he’d send them if I asked, but I’m not talking to a dude who’s requesting this and then saying he’s “not physically perfect.” That’s code for “I’m about to watch him wrestle a small and noncommittal dick, possibly in his mother’s basement.”

Would I get to watch his face as well, or is it just a penile situation? Not getting to see his face wouldn’t really do much for me…just a dick gone rogue…

Can it progress to sex? Or are you just looking to indulge that one aspect?

I wouldn’t even LET you come, asshat. You should suffer for not being more forthcoming…tee hee…

I should commend him for pursuing his dream, really.

But wow, you really CAN find anything on the Internet.

In today’s news: Top 5 places I never thought to put the body of Christ.

Wait, though…If the guy goes down on me after, is that, like, communion?

Happy Sunday, all. Go shop at Kink after church — they’ll fill you with the Spirit. (Spirit fingers? No, wait…)

Well… I mean, I guess it’d be rude of me to not at least TRY Netflix’s “Top Picks for Smug…” 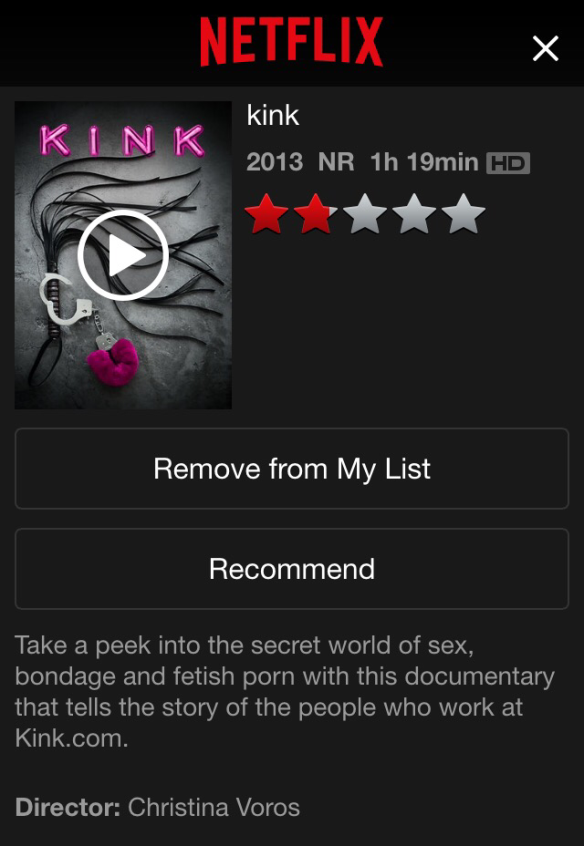