A 27-year-old on OkCupid sent me an intro message the other night, and I wasn’t interested, so I deleted it without responding.

This morning he sent a followup message: “You’re too pretty to give up on. I’m very persistent!”

Sweetie? This brand of “persistence” does not end with you getting the girl. Please don’t make me get all J. Lo in Enough — no one needs to see my midriff, I’m too lazy to learn boxing, and I would look absurd with that haircut. So maybe just quit being a dick.

I’ve also noticed many profiles that say things like, “If I send you a message, it’s rude to just ignore it and leave me wondering. The least you can do is write back to say you’re not interested.” Um, no, actually. The LEAST I can do is ignore you. It’s one click to delete a message. Writing you back adds the effort of keystrokes, so… that’s more I’d have to do, not least. See how words work?

And boo hoo, a stranger finds me “rude?” Not polite and acquiescent like a proper lady should be? I’m sad. No, really. This is my sad face.

If a guy doesn’t respond to my message within a day or two, I don’t wonder — he’s not interested.

Via Body For Wife: She Doesn’t Owe You Shit

I understand this goes against my general “do unto others” philosophy — I would NOT want this done to me. I feel bad about it, it’s a dick move, and makes me a GIANT asshole.

We all on board? Excellent, ’cause I’m posting this screenshot of an OkCupid message, anyway. There’s too much majesty in it to be confined by a mere retelling. You must behold the glory in its entirety.

Identifying information has been deleted/changed to protect the overly cheerful at 8:goddamn-13 in the morning. 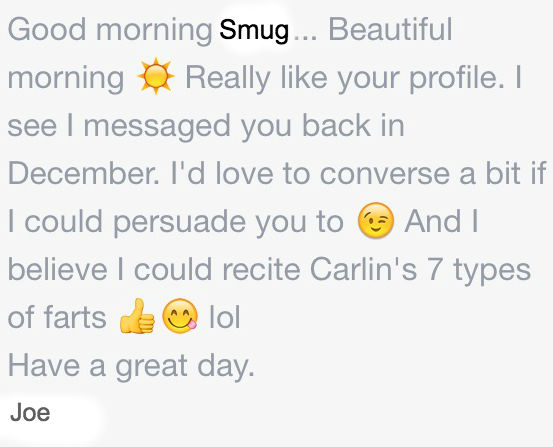 I just got an OkCupid intro message…from a 6’3″, “overweight” (his word choice) “Happily Married” man, with a single Photoshopped profile photo that obscures his face and shows none of his body, asking if I’d be into some “non-committal intamcy” (his spelling error).

This is his entire self-summary: “Happily Married, I just enjoy more, like any man.”

Hmmm… You know, enticing as you’ve made all this, I’m probably good on that for a lifetime.

I do appreciate the offer to fuck me and then go away — sometimes I think that’s all I need. But I’m a LADY, dicknuts. You have to come correct (heh) and supply me at least a few real photos of what I’d be working with before I’d even BEGIN to consider this. If I can’t see your face, how am I supposed to know if I want to sit on it?

Honestly. Whatever happened to chivalry?

Also…”non-committal intimacy?” You are a grody bastard whose wife won’t bang him anymore, possibly because you’re on a dating site hustlin’ for some strange. Own it.

NB: If that’s what you’ve agreed to in your marriage, you go ahead and get yours. I’ve actually briefly considered similar offers from other, more forthright men. This dude just had a bit of the sketch on him.

Also, nothing wrong with “overweight.” Half that weight is probably just his giant balls.

Today I saw my psychiatrist (ie, my Drug Czar, not Talky Therapist — it takes a village, y’all). And she thinks I should start dating again, before I “get used to being alone.”

You’re shrinks. Shouldn’t I be OK being alone? Shouldn’t I be happy with myself before I bring in a Crazy copilot? Did you HEAR me tell you about the last times I tried dating?

“Well, you can just date casually. You don’t have to sleep with them.”

Well, no, I don’t HAVE to. But if history is any indication, I WILL. If I kiss (and I really NEED to kiss), I will tease, and then the man will end up touching the “on” switch on my neck, then I will lose my tenuous-at-best “lady” decorum, and then suddenly we’re post-coital, and he wants me to spend Christmas with him or leave a toothbrush at his place, and then I’m hyperventilating and doing The Fadeaway because I am a big fat coward.

I don’t feel like dating right now. I’m not cute in the winter, all shrouded in big bulky sweaters and corduroy pants. (Though, it’s supposed to be fucking 74 degrees in Philadelphia on Thursday, so I guess that’s not a valid defense right now.) But generally, sundresses are more my wheelhouse.

And by the way? I LIKE being alone. I’m pretty rad. That’s how I’ll know when I’m ready to deal with a relationship — if I wouldn’t rather be alone than with the guy. This almost never happens. Normally it’s “UGH, I have to…TALK to someone? And…shave things? This will not stand!”

On one hand, I don’t think it’s fair to potential dates that I would be comparing them at least a little to these previous relationships. But Talky Therapist tells me that’s actually a good thing, because I know what I want and what I don’t. Also, I do understand it’s not doing me any good to sit and wallow about any man who, perhaps over-simplistically, doesn’t want to be with me. So maybe it wouldn’t hurt to go check out OkCupid again. (I’m not going to meet anyone in a bar, that’s not my scene. I wanna get with a dude who steps to me in a Barnes & Noble — instead of sending me a drink from across a bar, he can send his favorite book and preferably a scone.)

If nothing else, attempting to date will give me good stories here. So here’s to 2016 being the year I finally get some. (And blah blah blah, true love, soulmates, rainbows — FINE. If I happen to find that while rubbing up against people, then yay for me.)

As if we needed more proof of what a classy lady I am, I pulled my bra strap away from my back because it was itching, and ended up putting my finger through the fabric.

I mean, it’s like you can’t rely on a 5-year-old bra anymore. What CAN I believe in, Universe?

Also, this is totally how I roll when I wear flannel pajamas. Victoria’s Secret gets me. 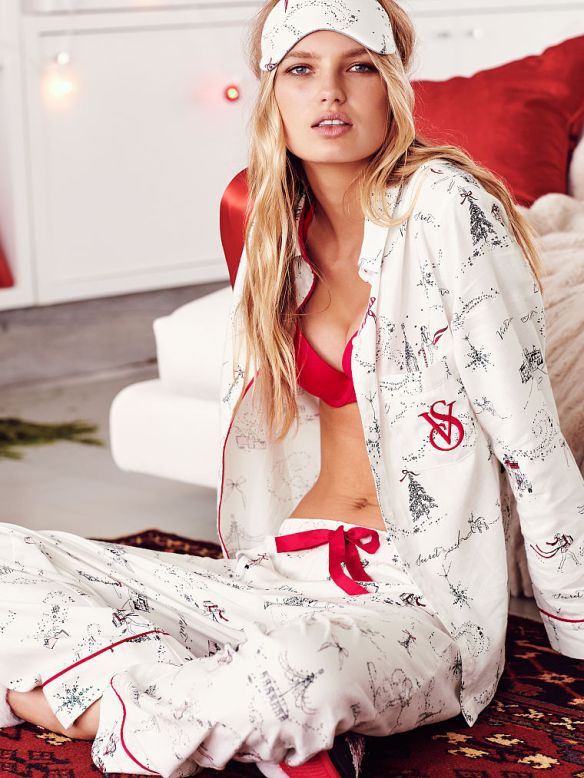 I am obsessed with this song — it’s my new Sassy Strut/car singing/Pull Yourself Together song. In addition:

a) Miranda Lambert looks better unkempt than I do when I bring my capital-A game. I need more eye makeup, like, immediately.

b) I’m pretty sure I’ve HAD this conversation with my mother.

c) You can write it off because it’s country music, but it’s a bawdy, curvy, big-haired blonde sangin’ ’bout drankin’, and that there is some of my favorite comfort music. (For obvious reasons.) This song is the twangy, guitar-driven equivalent of “Conceal, don’t feel” — Miranda Lambert is basically Elsa, and you KNOW that movie would’ve been way better with whiskey and pills.

A man in my office, who’s old enough to be my father, was just making small talk with me, and he said, “I have jury duty next week. What a pain in the ass, I have to take the fuckin’ train in…”WHOA. Watch your fucking mouth, motherfucker! This is a fucking place of business, and I am a fucking LADY!

Do you, like, smell the hoodrat on me? Is there something about my face that makes you think this is acceptable? It’s not even that I’m a woman — it’s just bad manners, and you KNOW you have bad manners if I’M the one pointing it out. But also… yes, as long as wage gaps and thigh gaps are things I’m just expected to deal with, I do expect a base level of civility and etiquette until you get the all-clear that I’m cool with that kind of rapport, especially at work, especially when you’re a grown-ass man, shitdick.

(I had a similar reaction when a 21-year-old female assistant used “fuck” during our second at-work conversation. BITCH, I am old enough to be your mother, and I will knock the “fuck” right out of your FACE.)

Seen on a t-shirt on a lady shopper at Target: “Act like a lady, think like a boss.”

Oh. Oh, honey. I know you think you’re helping, but you’re really not.

“Hello. Something about you has had a tangible effect on my nether regions, but I’m trying to be a lady about it so you’ll at least text me in the morning.”

I can always count on you to ninja your way into my crankypants but still leave me feeling like a lady.

You, sir, are a gentleman and a scholar.