I just learned that May is Mental Health Awareness Month, so I’m going to post about it a bit, even though the posts never really go well. But I have a lot of friends who deal with mental health issues, and I dabble (maybe), so I think it’s important. Though I’ll try not to harp on it, because I understand it’s kind of a buzzkill.

Plus, Kristen Bell, who’s just delightful. And duh, obviously the little sister from Frozen was depressed and anxious, damn. Elsa was all shitty and agoraphobic, totally repressed because her parents wouldn’t let her feel her feelings. Wouldn’t even build a snowman with her kid sister, SHIIIT.

That’s why Anna was sad, disenchanted, and about to marry some asshole she’d known for a day just so she could get some attention. Baby girl had ISSUES.

(Seriously, though, good for her for talking about it, and in People magazine — possibly the most mainstream publication ever. And being chill about it, just, “Hey, this is common, and seeking help for it isn’t something you should be ashamed of.”) 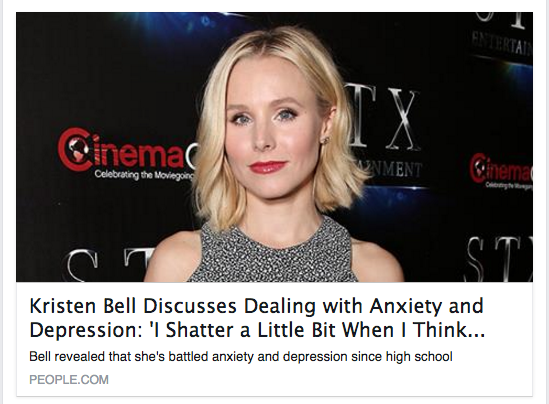