Father’s Day is interesting when both you and your sister are mad at your father for being a passive-aggressive dumbass and — let’s be honest — for always choosing his other family over you. Especially when you don’t feel welcome in his home right now, anyway, because his wife is a psychotic cunt. (Psychoticunt?)

What’s good, Hallmark? Where’s my cute, clever card for this?

The therapist said it’s perfectly acceptable for me to just text him, so…score.

Sorry, man, but…ya know — cats, cradle, etc. For once I gotta choose me instead of keeping peace. You’re both already pissy with me — fuck it, I might as well get a relaxing Sunday out of it.

P.S. My therapist didn’t know “Cat’s in the Cradle,” and I’m honestly stunned they don’t teach that shit in therapy school. That and “Daddy Wasn’t There.” Y’all need to re-examine your curriculum. Music education is important.

One of my dating matches asked about my “guilty pleasure” entertainment choices, and aside from “I never feel guilty about pleasure,” which just sounds filthy in a way I’m not yet going for… I dunno, I’m pretty open about the lame shit I like. I’m not trying to make a guy go to a Pistol Annies show with me, or watch “Jane the Virgin,” or go see “Legally Blonde: the Musical” the 47 more times I’M totally gonna go see it before it leaves Philly. I don’t need you for that.

I mean, I AM gonna need you to like John Mulaney so I know you’re not a goddamn soulless monster, but I don’t feel guilty about that at all. A lady has to have standards, sir.

Me: “My scale still hasn’t moved, but I can see and feel changes in my body, so I know the scale is just being a jerk.”

Therapist: “I’m glad you blame the scale. Some people blame themselves, thinking they have to exercise more often or restrict their diets more.”

Aaand that’s how I decided to name my scale Michael Bolton.

I get a lot of (good-natured) ribbing for liking country music, but I don’t know how I could possibly NOT adore these lyrics paired with three sassy ladies, rollicking GUI-tars, and some motherfucking fiddles.

(Pistol Annies, “Got My Name Changed Back.” Catchy as fuck.) 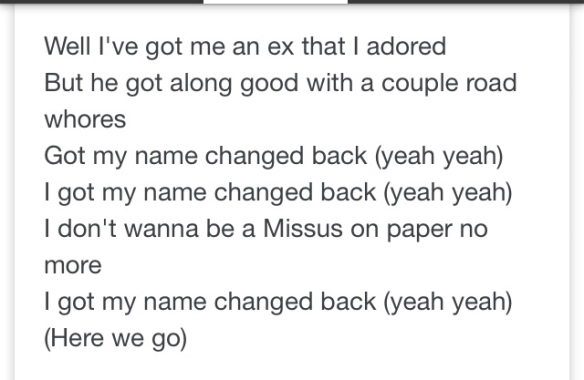 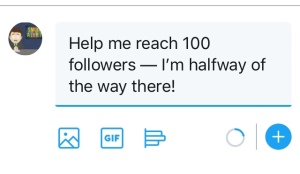 A. Even this TWEET doesn’t give a fuck about 50, only its progress toward 100.

B. Twitter, have y’all just never HEARD “Livin’ on a Prayer?”

So… I guess when I was a kid I really liked the Olivia Newton-John song “Physical.” I genuinely thought it was about working out.

But now it’s just SUPER weird when my father posts the video to his Facebook page and tags me.

That song’s about screwing. Like…A LOT.

Could you maybe not?

There’s a Chris Rock bit where he talks about men talking too damn much and ruining a woman’s desire to fuck them — “You say the wrong thing, them panties are comin’ up mighty fast. A woman wants to fuck you? Shut up, let it happen.”

(I’m QUITE sure this also happens when women talk too much to men — I have most assuredly DONE it, I know my own.)

But I went out tonight to see a friend’s band play at my local townie bar, and immediately wanted to bang one of the singers — hot, glasses, tattoos, super muscle-y arms that could throw me all around… UNF.

But then dude started talking. And during the course of his performance, he said someone had “killed hisself,” and he also dabbled in some light “jokey” homophobia AND as a bonus, mocked his friend for saying something kinda intellectual-like — you know how we hate all that book learnin’.

Also, he swore so much that even *I* was like, “GodDAMN, man. You wanna fuckin’ dial that back?”

So. Alas, tonight was not the night I lured an unsuspecting male back to my lair. But hope springs eternal!