I’m sure you’ve seen quite enough of this on your Facebook feeds this week, so I hate to add to the bullshit. But the combination of characters I thought of made me laugh.

“Describe yourself in three fictional characters…”

Check it out, y’all, I’m not even a narcissist. This blog is for SCIENCE.

Via Inc.com: The Mental Health Benefits of Writing, Backed by Science: 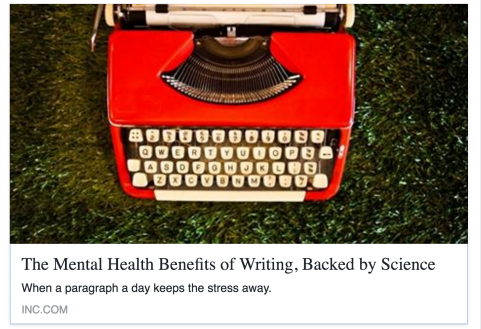 That’s actually how the page started, as ersatz breakup therapy — I thought I could just write my way sane. As it turns out, I needed REAL therapy, but am still a filthy whore for those red “like” notifications, and the writing definitely helps, so I kept it up. Along with a private journal. And a Twitter. And a new blog where I work clean so I can put it on my résumé.

Don’t judge me. “I just have a lot of feelings.”

I have no idea what’s going on in my brain this weekend, but it’s been a steady steam of tiny realizations, making me immensely grateful for the relationships (friend, family, romantic) I have and how they’ve shaped me as a person.

Also a lot of, “Why do people think this way about me?” “Well, because sometimes you act that way, and you never tell anyone when things bother you. Maybe try that?” If that fails, some classic advice from Greg Behrendt: “When you are around an asshole, it is your responsibility to LEAVE. You cannot wait for them to get better.”

And a dash of wondering if *everything* I’m doing with my life right now is the wrong choice. So that’s always a good time.

Could I NOT have a lifetime’s worth of introspection in 3 days? I know it’s a 3-day weekend, but goddamn, brain, work with me here. Can’t we just sleep late and clean out closets like normal people? Do you have to think this much?

I’ve been attracted to a good friend of mine for a long time (about a year), and there’s been some pretty heavy mutual flirtation, but he has a girlfriend. Yes, a serious one. And no, I’m not trying to break them up — first, I’m not an asshole; second, I wouldn’t win that battle; third, even if I “won,” I wouldn’t know what I wanted from him. I’ll just stick to dating/breaking up with transient morons, rather than someone I want to ensure remains my friend at a minimum for a long time. But our interaction was making me feel a number of things that were not OK for either of us.

ANYWAY. I sent an email to another friend about this, saying:

“He and I are OK, I think. We had a conversation, and now it’s possible we’re both faking it ’til we make it, but we’ve been talking normally and not flirting. It’s like a fog lifted: I’m still into him, but I’m too cute to place second. Plus, I have to get a fucking job (or a job fucking), but either way, I can’t be dealing with that right now. If it’s meant to be something else, it will be when the time is right. For now, I got shit to do.”

This discussion happened about 2 weeks ago. Even though he and I have both tried 100 times before to be “just friends,” I think we’re finally on the same page at the same time, so it’s actually working. Neither of us is goading the other into flirting, and I’m not being needy or throwing myself at him — aspects of my personality that I HATE but sometimes can’t control. If nothing else, I don’t want to be in any relationship (even a friendship) where I’m That Girl, so that needs to get settled first. I think it was happening as a byproduct of an otherwise restless time in my life, so I have to take care of me first. (Which, by the way, still feels absurd. I’m an “adult,” right? How do I still have so much to work on just to be the kind of person I WANT to be?) But I don’t want to be That Girl, I am NOT That Girl, and I’m not interested in the kind of guy who’d be into That Girl. So That Girl needs to get bitch-slapped.

I never thought I was a person who would lose myself without a relationship, or who identified herself by her job in any significant way.

But I think a lot of my confidence and identity came from being secure for so long in having a constant relationship support system right in my home, and from having a secure job. Now, without those aspects, I feel kind of unmoored.

For a while it was, “I hate my job, but I have this relationship, so everything is good.” And then we broke up.

Now, some days, all the available options aren’t exciting — they’re overwhelming. I can do almost literally anything I want. I just don’t know what I want.

I know, “Boo hoo, woe is me, the world is my oyster.” But it’s surprisingly difficult to process. I’ve been single before, but it’s been 10 years since I’ve had to think of myself much beyond a foundation of “girlfriend” and “employed,” and now I’m neither. I’m just…me. I don’t think I had a very strong sense of self outside of those two aspects. Maybe once I handle “employed,” “self” will follow?

I’d love to tell you I’ve taken this unemployed/alone time to “find myself” or whatever, but mostly I’ve just been trying (successfully, I think) to keep myself from unraveling. I’m just trying to remember basic functions like brushing my teeth, paying bills, and talking to friends so I don’t go Full Recluse. And it’s not as if I’ve been ignoring some booming job market — every time I force myself to look at the job sites, it just gets more depressing. But really, it’s probably time to do something. I just need to figure out what.

We’ll start with the job. That’s more important than any of this relationship noise, and I think I’m finally ready to have something more productive to focus on. (At least I am today. Who the hell knows which Me I’ll wake up to tomorrow.)

But also, I’ll be unemployed for a while longer yet during the application/interview stages, so it’s probably also time I do some of the things I always said I’d do “when I have time.” I have nothing BUT time. Really, the only thing stopping me is me.