The whole Aziz Ansari thing has brought up a lot of weird shit for me, because I know I’ve let things happen I didn’t want to, for a lot of different reasons, and the men couldn’t possibly have known I wasn’t into it, because I pretended to be. And I would never blame them for that.

That said, this woman is saying she made it clear, verbally and non, that she wanted to slow things down. And so I do blame him.

THAT said, I DID wonder why she didn’t leave, even having BEEN in similar situations where I ALSO didn’t leave, and I wasn’t even with a famously “woke” comedian who’s literally written a book on “Modern Romance.”

This sums it up.

Via Sex with Timaree:

Via Very Smart Brothas: Ask Agatha: I Can’t Orgasm During Sex. What Should I Do? 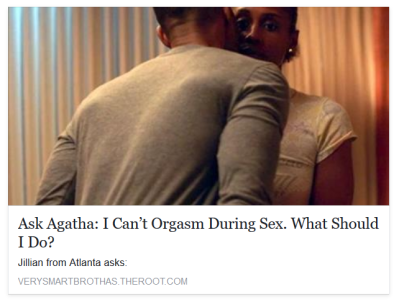 Yesterday my friends told me they ran into Guy I Dated For a Minute, and now for some reason it’s all I can think about.

I THINK it’s partly because my doctors are screwing with the drugs I take, so I hadn’t been in the greatest mental place, anyway, but it’s sort of spiraled into a fun rehash of the “not enoughs” — pretty, smart, cool, good in bed… All the things you think you can suck at, I’ve been telling myself I suck at. Like… this dude doesn’t even want to be FRIENDS with me. What the fuck is that? Am I THAT boring? I even offered him friends with benefits and…still no? So I’m not good enough in bed to fuck a third time?

And by the way? The sex was…serviceable. It was good, but not great. It got the job done. And the dude’s nice and all, but I think I mostly saw friendship there. I have no idea why this is bothering me so much NOW. We’ve been not dating longer than we WERE dating, and it HADN’T been bothering me before. I think I’m finally getting that we’re not going to even be friends, and so I just feel gross and used and stupid. Again. (I teared up while writing that, so it’s possible I nailed it.)

The “stupid” is big because I’m attracted to people smarter than I am, in relationships and friendships, and it goddamn blows to not even be friends-worthy.

(Here’s hoping putting this in writing is therapeutic, because my actual therapist is on vacation this week.)

I met a guy last weekend, and IN MY HEAD, we’ve already been dating (and sleeping together — frequently) for a week.

So…I guess I should probably, like…SAY something to him ever.

He’s a friend of a friend. I’ve ascertained that he’s single and straight. And when I asked, my friend said she’d been hoping I would because she “thought it’d be a good match.”

Now I just need to figure out what the hell is going on in MY head to make sure I don’t end up being totally weird to a friend of a friend…again. Last time this happened, I slept with the dude way too soon, then realized we had nothing in common and ended up pulling The Fadeaway on him.

I’ve spent so much time “not being ready” that I don’t know if I AM ready, or if it’s just my vagina that’s ready, all, “SINGLE DICK AHOY!”

SO. My next therapy appointment isn’t until NEXT week, eh? Mm’kay. That…that’s fine…

Seen in an OkCupid profile: “I am definitely a stereotypical academic in the sense that I love wearing corduroy blazers and holing up in ivory towers.”

The only things we have in common are burritos, mushroom hatred, High Fidelity, and grammar, but let’s be honest, I’ve based relationships on less. I dated a guy for 8 months because we could both quote George Carlin.

Plus, another of his favorite movies is Josie and the Pussycats, so he clearly also enjoys dumb, fluffy things.

Hello, Professor. I will be your dumb, fluffy thing.

I don’t know this writer’s work, but I’m going to. 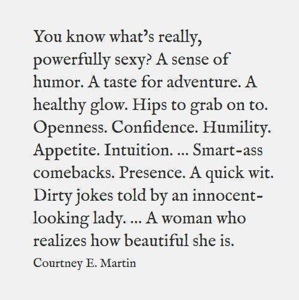 “No one should be spoken to or about the way West has been in the past week. No one.

“We can argue for days about whether rape can or should be joked about, whether it is more or less unspeakable than infanticide or hate crimes or pedophilia or any other type of horrific act. But let the conversation be bigger than that. Don’t just ask if rape can be funny. Ask why a woman’s body is the go-to target for the majority of internet conversation and criticism. Ask why that body is the go-to cause for a complete dismissal of opinion and violence is the go-to threat when a woman is deemed ‘wrong’ on the internet.”

How to Be a Dick, Because Sometimes You Have to Be

“…If someone is dishing out dick casserole, they should be prepared to eat a bowl of dicks in return. This is physics; there is nothing I can do about it. “