Sometimes my brain is an asshole and tells me awful things, so the therapist has been encouraging me to “reframe” my perspective to something more positive.

To that end, I am NOT single because I am “boring,” or “stupid,” or “undesirable.”

I am merely on Dick Sabbatical. *nod* Sounds scholarly, right? Like I’d been researching dick so zealously for such a long time that one day I went to the board and I was just like, “Naw, man, I need a break — I have cock fatigue.” 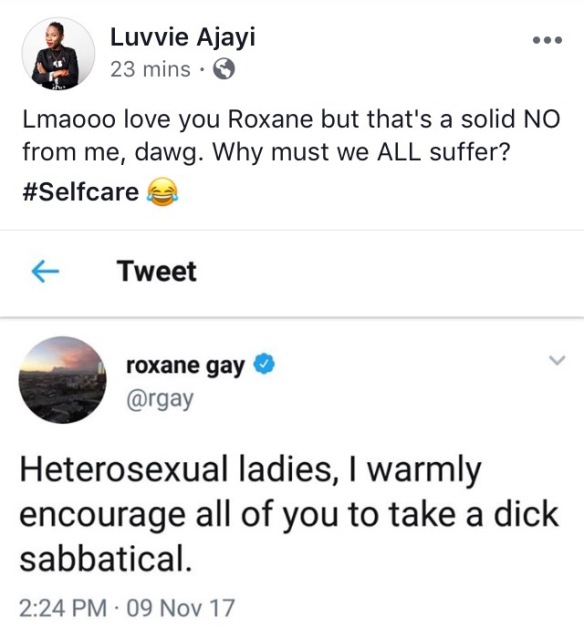 One of the worst things about having my whole family on my personal Facebook is that, in the past 24 hours, at least one of them has likely seen me “like” four different wineries, the Philly chapter of a suicide prevention organization, multiple rape counseling centers, and a national association for depression and mood disorders.

Honestly, I just want to tour the wineries; I’m doing a 5K to support the suicide prevention group because I think it’s an important cause; I’m looking for a job at the counseling centers; and…well, I’m a depraved bastard who’s interested in mood disorders. *shrug* Y’all raised me.

Another fun and informative class at Kink Shoppe with Yvette St. James — toys and apps and lubes, oh my! More classes to come! (Heh.)

Also, many thanks to the Kink staff for filling me in (tee hee) on the features of my next life investment… 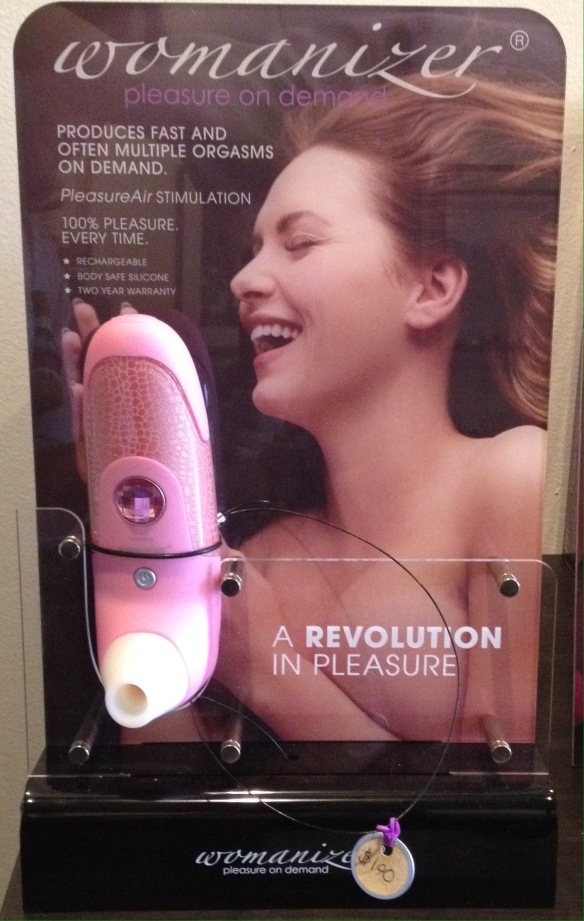 One of my OkCupid matches is a guy whose username is 12inchistoobig.* His profile says he chose the name because yes, it IS, and it’s been an issue for him sexually when the woman can’t take it. So he wants to warn us villagers up front.

He says he’ll prove he’s actually that big, which I suppose would be a fairly straightforward Exhibit A.

But then he says, before things get too involved, he also wants proof the woman can handle it, and the proof would be “they make toys in that size.” I’m not sure how that would go, exactly… Skype? FaceTime? Do you buy the toy, or is it a BYOBC situation?** If I’m comfortable enough to try a toy in your presence, we’ve gotten pretty close, so I should probably just try your dick, no?

Now, none of MY toys are that big — standard size gets the job done just fine.

So, no, Dirk Diggler, I don’t know if I COULD handle it, but…I mean…I feel like we should try. For research. I like science. Do you like science? We should science.

*Not his real username.
** There’s a “five-dollar footlong” joke there somewhere, but I’m tired, and Jared ruined all Subway humor. 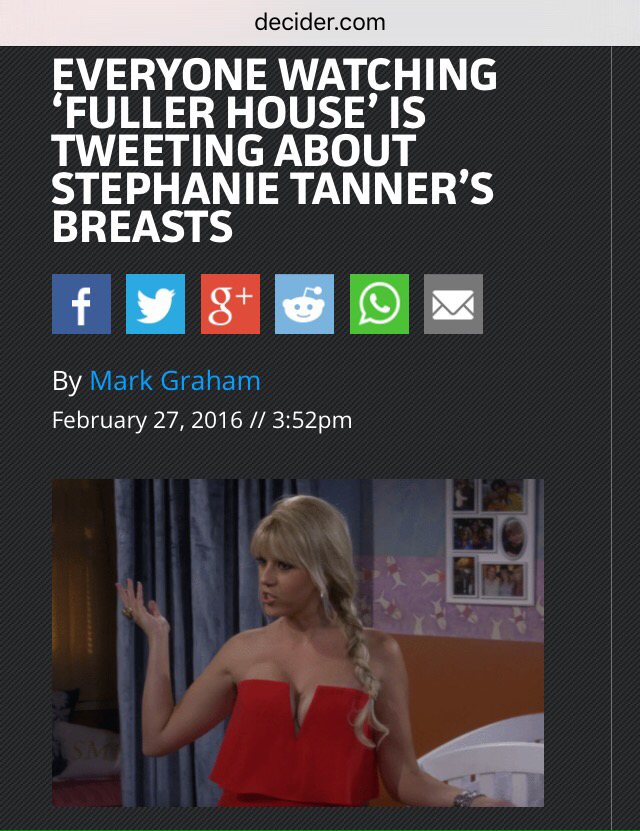 Last weekend I found out the farmers market coffee guy knows my name, and when he said it, it left me clitormented (clitterpated?) for the rest of the day. Dude is married, but he’s attractive enough, and when you add in the fact that he provides me coffee, I KIND of want to make out with him. I used to joke with my friends, because his wife’s name is also Smug, so he wouldn’t even have to change the name he mutters in bed.

But I was reading an article about the business, and I found out HIS name is the same as my ex’s, so NEITHER of us would have to change the name we say in bed!

I really think we should explore this. Sorry, y’all. I’m no longer Smug Singleton — I am Smug Wife-Swapped with my Coffee Dealer.

Also, this is disgusting, but it would be fantastic if caffeine were sexually transmitted. Can you imagine? You know how different foods you eat can affect the way you taste? What if all the coffee he drank added caffeine to his…um… contents, and I could either swallow it and get a jolt of caffeine, OR, OMG, what if I could get caffeine fucked INTO me?

Dear. Holy. Jesus. I need a government grant for this immediately. A caffeine-infused orgasm sounds like my ideal situation.

(Nobody harsh my buzz — I know that’s not how semen works. Well. Probably. I should really do the leg work…the open-leg work. OK, sorry, I’m done now.)

I got an email from Ulta, and one of the featured products is called “Better than Sex” mascara. 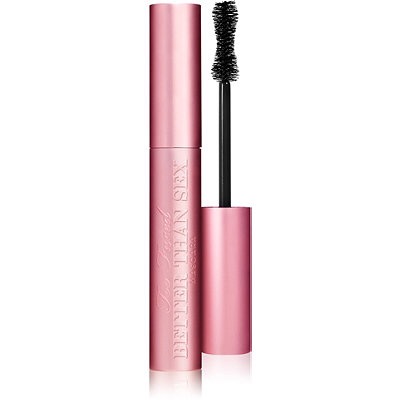 Now, don’t get me wrong, I’ve had some terrible sex, and I’ve had some great mascara. But the sex has always been at least marginally superior, even if only because someone bought me food first.

I considered that mascara has helped me GET sex by making me prettier, but I don’t think that’s true. Lipstick, maybe, but I’m fairly certain no man has ever looked at any woman’s eyelashes and decided not to fuck her. (“Dude, she’s SO hot. Those hips, that hair, that rack… But nah, I’m not going to go talk to her. Did you see her eyelashes?! Bitch, please.”) But hey, maybe I’m underestimating y’all as a gender. Maybe a plump set of…lashes really does it for you.

However, I’m nothing if not thorough, so just as Nars Orgasm blush changed my life, I’ll clearly have to try this mascara. For, um, research. FOR SCIENCE.

2. How do I get involved in this field of scientific research?

‘Woman on top’ is most dangerous sex position, scientists conclude 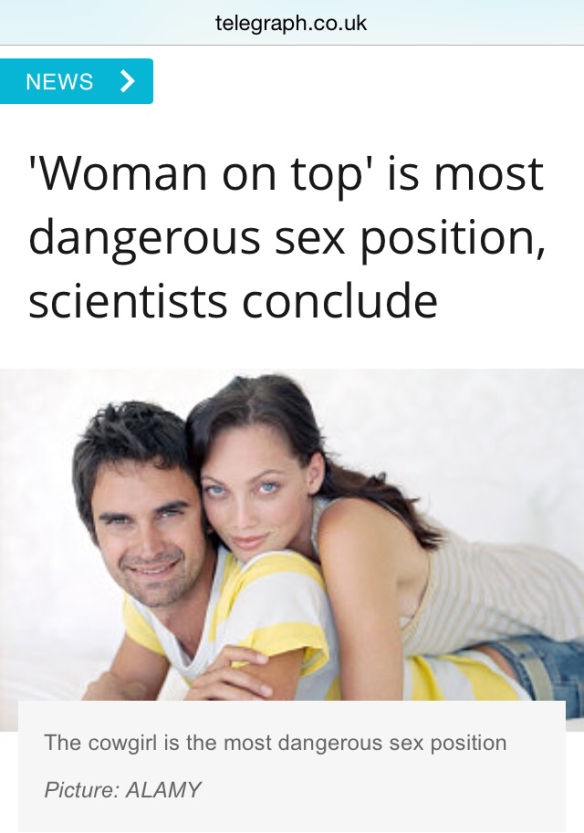