This is the most excited I’ve ever been by Bumble.

I really do like craft beer, but this is pretty great. I’ve definitely been on a few episodes of Side Eye from the Beer Guy when beer bros don’t think I know what I’m talking about.

Ahem, and for the bonus dick: “The other night I sampled Stone Brewing’s W00t Stout. You know that one where they collaborated with Wil Wheaton? OMG, I know—how great is Wil Wheaton?!”

Via Reductress: I’m Not Really Into Craft Beer, I’m Just Here for the Dick 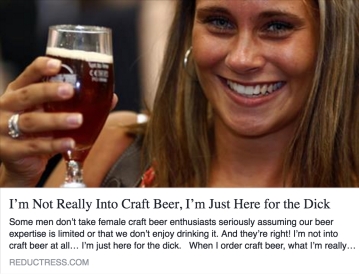 By the way, y’all should just go follow Reductress, because they’re delightful and may be my soulmates:
6 Cheese Wheels For When You Give Up On Sex

I may have to cancel my other date, because as it turns out, I may not be sexually frustrated ENOUGH to hook up with an open-married man with herpes simplex 1 (the cold sore kind).

I’m actually bummed about this. He was my first online dating spark and I was looking forward to meeting, kissing, and eventually sleeping with him. Understand how MUCH I was looking forward to it, because I’m actually debating, “What are the odds I already have/will get this?”If this were any other guy, it’d be a Fadeaway tout suite. But Dude was willing to go out to dinner with me, fuck me, then LEAVE, and he’s not an idiot. THAT’S THE DREAM.

Obviously I’m glad he told me, and I’m going to get my own full STI screen. Who the hell knows, maybe I already have it — you can get it a million different (non-sexual) ways and never show symptoms. If I DO…well, the bright side is that sex is on. But if I don’t, I don’t want to go through the rest of my life disclosing this to potential partners and boyfriends because I had casual sex with a married guy.

It’s interesting: I polled a few friends about this and got divided responses. Some people said, “Eh. No big deal, everyone has it,” and others were like, “No. That’s some soulmate shit, not something you want to get from a married fling.”

One friend said I was “Chandlering,” a nod to Chandler Bing from Friends, who used reasons like “mascara goop” and giant heads as excuses not to date women because he was afraid. I AM afraid, but truly believe I haven’t rejected anyone for the male equivalent of “mascara goop.” I’m waiting for a decent bit of chemistry, someone worth shaving my legs for, and genuinely haven’t had it until now. Also, Chandler’s romantic issues ended with one of the top 5 best marriage proposals in TV history, so if I AM Chandler, I’ll take it.

In researching this, I’ve learned a lot of places don’t screen for herpes as part of a routine STI test — you can add it to the standard test, or you can test for it separately. So I’ve had “an STI test,” but I think the woman said those screen only for chlamydia, gonorrhea, and HIV. So… “The more you know… *brrrrring*”

I’ve also learned that Googling “herpes” will make you never want to have sex again, and that getting tested for STIs is a tremendous pain in the balls: my insurance won’t cover testing at Planned Parenthood, and I can’t get a gyno appointment until April. Can’t they add this to CVS’s Minute Clinic services? It seems pretty important.

Also, it is not at all weird that my personal Facebook, not connected to OkCupid in any way, suggested I add Hot Married Guy as a friend. But damn, he’s cute… Goddammit…

I got a message from this guy on OkCupid asking, “u dtf?”

So, listen, it’s been fun and all, but I probably can’t write this blog anymore now that I’ve found the love of my life. I should really go start shopping for my wedding dress.

I just mentioned the other day that all those shirtless dudes were looking for “DTF” girl. And I totally AM “DTF” — I will bang you like a gavel, that’s just not how you get me to do it. You can’t get in my pants with abbreviations; it feels like you’re not motivated enough to fuck me to completion.

I think I’ve met my soulmate at work.

I mean, he’s gay, and married, but I’m clearly unfuckable, anyway, so I think we could make this work.

(Kidding. I know I could catch a dick if I tried.)

“Do not drink alcohol while taking Lexapro.”

“Pfft. That’s for amateurs. ‘Bring me another mai tai!'”*

* If you know the quote, you’re probably my soulmate. Which is a shame, for I am dead inside and incapable of feeling feelings. Good on you, though.

“Foreplay is like mozzarella sticks. The more you think about it, the more apt it is.”

I am in love with this man.

Via Cosmo UK: 12 Sex Things Men Really Don’t Give a Crap About

Some friends and I discuss what we’re wearing to our ladies’ night dinner:

“You’re all married, so odds are slim you’ll be picking anyone up at a Mexican restaurant. I, on the other hand, have to come correct. It stands to reason I’d meet my soulmate over guacamole.”

Remember the unfunny comedian from Match.com I dated briefly? The one who put a little too much “S” in his “S&M?”

He’s apparently on OKCupid, too, and just looked at my profile. Gah! See, this is why I’m glad I don’t have profile photos. Well, PART of why.

Surprising no one, his username on OKC is swiped from another (funnier) comedian’s bit. And what’s sad is, I’m probably the only woman on Earth who’d know that. Between the psychosis and the standup, I’m probably his soulmate. Damn shame about the terrible sex. (Kidding. He was also just an asshole.)

Remember when I signed up for OkCupid mostly for hilarious blog material?

I apologize for my flippancy, you guys, because I do believe I’ve just found my soulmate.

OKC has a set of fill-in-the-blank questions, and one is, “You should message me if…”

So. This guy says ladies should message him if: “You are not looking for a husband. You sometimes think about being with a smart, assertive, masculine man, with a hot body, and an amazing cock.”

Who else is wagering money that I could get him to send me a photo of his dick?

(I won’t. I’m actually kind of uncomfortable putting his words here. Everyone is entitled to their groove and OKC can be a playground of casual sex opps. And I HAVE thought about everything he said. It just made me giggle. Maybe his cock IS amazing. His body isn’t bad, he posted photos — JUST of his body, none of his face. But I’m not enough of an asshole to post them here.)