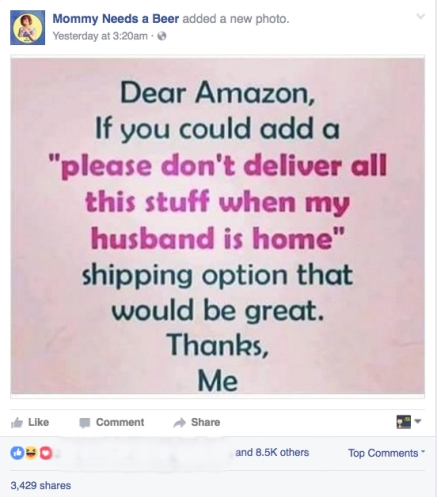 I only bothered reading the first 20 or so comments, so maybe someone said it beyond that, but I didn’t see anyone suggest maybe, um…NOT lying to your spouse about your spending habits?

One of the comments LEGIT advised using Amazon’s lockers so the husbands wouldn’t see.

*sigh* You go enjoy your very healthy marriage. I’m single, so what the shit do *I* know?

Also, “HA HA HA, we’re women and we love to shop and we do so irresponsibly and then lie about it, HA HA HA FUNNY HA HA.”

Sometimes I worry that I’m SUPER-stereotypically white when I dance — just awkward and stiff, totally unsexy, as if my hips need to be oiled, Tin-Man-style, and with no rhythm whatsoever.

This is not one of those times.

I’d been talking to this guy on OkCupid, and should’ve known he was a douche when his intro message boasted that his profile was “well-crafted.” Um, yeah, his profile says he’s looking to meet the “girls of my dreams.” I asked about it, and he said it was originally a typo, but he decided to leave it. OK, whatever. I’m not looking to be the girl of anyone’s dreams right now, anyway — let’s roll those dice.

We’re chatting, maybe 10 messages back and forth total, and he asks if there’s anything I want him to know about me. I write three arbitrary things right before I go to sleep, including: “I firmly believe all CVS drive-thrus should also serve fries.” (Come the hell on, that’d be great.)

This morning I wake up to two messages. In them are three questions, which I will answer for you guys, but got him immediately deleted and blocked. I almost replied, “Yeah, we’re done here,” but decided against it. In hindsight, I wish I’d sent the message to smarter friends who could’ve written back and made him cry.

So here are the offending questions. (And hey, this is just my offense. If you’re intrigued, comment or send a message — I’ll tell you his username and you can grab that net and catch that beautiful butterfly.)

1. “Do you go to CVS or McDonald’s often enough that that’s an issue?”
Uhh… yeah. I go to CVS once a month. CVS provides the lovely drugs that keep me:
A) a functional human;
B) focused;
C) not riddled with heinous allergies; and
D) most relevant to you, NOT PREGNANT.

Also, McDonald’s fries aren’t my favorite, but once a month, at a particular time, I will cut you for Wendy’s fries and a Frosty, or an anytime Egg McMuffin, a societal evolution I regard as the Lord personally answering my lifelong prayer. If my occasional fast food habit is an issue, this isn’t going to work. If you offer me fucking kale during my period, you WILL get murdered with a stick.

2. “Why do guys send dick pics to women? I have to assume it’s appealing to some women, but I don’t get it. I’d love to see photos of your boobs, ass, and curves, but I really don’t want to see a photo of anyone’s vagina.”
AHEM. Well, first of all, my vagina is a goddamn work of art. (Kidding. I haven’t looked at the area in years beyond lawn maintenance. It could be the Batcave for all I know.) Vagina pics aren’t my thing, but I know some people who dig them. And if a guy I liked asked for one, and had previously earned access to the region, I would accommodate. I’d probably put makeup on it first, and obsess about its best side, but I’d do it.

But also… I enjoy dick pics, with an important caveat: I have to AGREE to them. I don’t just want to see rogue dick, all superfluous and out of its natural habitat. However, I will happily behold the penis of a literate man who’s said nice things to me and had dinner with me and maybe we’ve made out a little. I’d rather see it in person and THEN a photo, but in a proper setting, I don’t mind seeing the dick that awaits me, and how I’m affecting it.

3. “Why do women have photos in their profiles where they’re standing next to other women? Often women who are better looking??? It doesn’t make sense!”
Well. To start, your triple question marks are an assault against God and humanity.

And again, not all women. For a split second I thought he was talking about me, but I don’t do that because my friends are, in fact, cuter than I am. Plus I’d feel weird putting photos of them on a dating site. My photos are of ME: “This is my face, this is my [clothed] body. Can you deal with my Worf wrinkle and my extra 20 lbs? Excellent. Proceed.”

Also, I’ve seen plenty of men do that, too, and I hate it. Not because the other men are better looking (though I’ve definitely wondered, “Who’s your friend?”), but because I don’t want to scroll through a bunch of photos trying to ascertain which guy is you. Your main pic, at least, should be just you.

In addition, “better looking” is relative. Maybe the person looking at that photo thinks the friend is a total bridge troll, and the man/woman in the OKC profile is his/her ideal.

And, again, just as a blanket “fuck you,” I can’t abide generalizing women OR men. I can generalize YOU, though. And you’re a jag. 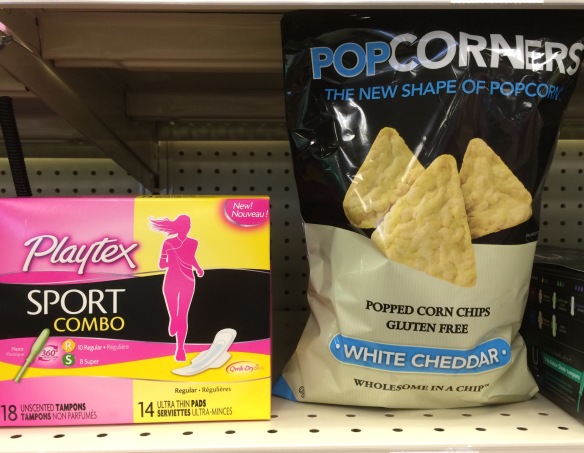 I just realized I’ve given my refrigerator a PMS shelf. I think eggs are supposed to go there, but instead I’ve stocked it with fresh mozzarella cheese that I sprinkle salt on, extra sharp cheddar, peanut butter cups, and sea-salt caramel chocolate.

If Fridgidaire ever figures this out, they’ll probably market it and make the shelf pink with sparkles and shit on it. I can see it now — it’ll be labeled “mommy’s special shelf” or some such nonsense. Or, OR… They’ll label it “veggies” and the commercial will show a knowing mom winking at the camera as she takes out her secret stash of hormonal adjustment, because “Ha ha, kids never want the veggies, amirite, moms?! Stereotypes are fun!”

For fuck’s sake, y’all… That could HAPPEN! Oh, wait… No, it couldn’t. We can’t acknowledge menstruation, except in ads for feminine care. And those are totally reality-based, what with the devil-may-care white pants and joyous frolicking through fields.